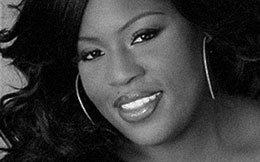 Best known to millions of TV viewers as a top four finalist during the 2007 season of “American Idol,” LaKisha Jones is ready to reclaim center stage in music, theatre and television. Her last album, “So Glad I’m Me” was full of Jones’ expressive, full-bodied and arresting vocals, the same voice that electrified “American Idol” viewers with the  “Dream girls” showstopper “And I Am Telling You” and later the Broadway stage in the Oprah Winfrey produced, Tony Award-winning musical, “The Color Purple.”    Following her Broadway stint, Jones provided vocal coaching on MTV’s reality competition “Legally Blonde: The Search for Elle Woods,” a show designed to find and hone Broadway’s next star.

Her drive and motivation dates back to her childhood in Flint, Michigan. Raised by her mother and grandmother, Jones was exposed to music by legendary singers such as Whitney Houston, Aretha Franklin and Patti LaBelle, with her grandmother urging the young girl to “let your voice shine” thereby prompting Jones to sing in church choirs, music programs, chorale groups and a cappella  choruses throughout high school.