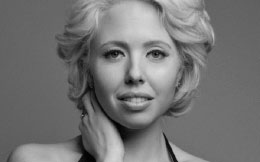 Chloe Lowery is an American singer/dancer/actress/songwriter born in Largo, Florida.  By the age of nine she was performing professionally at corporate events and by age 12 she was signed to RCA Records. She was featured on two movie soundtracks during that time, “Boys and Girls” and “Joe Somebody.”

While honing her crafts at prestigious music and acting schools in Boston and New York City, she toured with Big Brother and the Holding Company filling Janis Joplin’s shoes. Chloe simultaneously worked closely with world-renowned producer, Ric Wake that led to her collaboration with Yanni.  Chloe lent her vocals and songwriting talents to the 2009 Yanni Voices Project produced by Disney Pearl Imprint.  She was featured on PBS as a featured artist in “Yanni Voices Live from Acapulco.” Her most successful performance/release, Change, quickly became a fan favorite. After US and Mexico Tours with Yanni, she was signed to Disney/Hollywood Records as solo artist.  Chloe has since been featured on Yanni’s 2013,2014, and 2016 releases: Truth of Touch, Inspirato, and Sensuous Chill.

In the spring of 2010, Chloe joined multi-platinum selling rock band, Trans-Siberian Orchestra performing as Theresa on their Beethoven’s Last Night Tours.  Lowery joined their annual winter tour in 2011 to rave reviews for her renditions of For the Sake of our Brother (Oh Come all Ye Faithful), Prince of Peace, and Music Box Blues.  Chloe continues to work with TSO on stage and in the studio.

Lowery has since had the privilege to tour with Chris Botti, perform with the New York City Ballet as a featured vocalist, and contribute her songwriting talents for artists like Everclear, among many other accomplishments.

In late 2016, Chloe completed another tour with the Trans Siberian Orchestra as the lead female vocalist for the west band and was a featured vocalist in ROCKTOPIA, airing on PBS nationwide.  She just completed touring with Rocktopia in Spring of 2017.

While guesting with symphonies all over the world, Chloe is busy in the studio writing and recording for her debut solo release.

Follow Chloe on her social media outlets for daily updates!